Experience the Magic of Harvest

It’s 5:30 pm and we’re winding the roads in Mari’s camper van through the pale pink and bright orange cosmo flowers of the Stag’s Leap District. When we get closer to Atlas Peak, the road becomes a bit more uneven and the van barrels over the small rocks and mounds of dirt. We climb over the mountain, past a handful of deer, as we make our way toward the sun. It’s Mari’s wine safari, Mari jokes. Just northeast of Napa, it’s the mountainous and rugged Atlas Peak AVA that’s our destination for the night. This particular AVA is a winemaker’s paradise, a place where the high elevation and volcanic soils yield wines that are wildly rich in flavor and texture.

It’s here, on ONEHOPE’s own “Block 7” of the Edcora vineyard, that Mari sources her esteemed Cabernet Sauvignon grapes. Tonight, as apprentices for the evening under the education of the adventurous and spontaneous Mari Wells Coyle, we’ll be camping in her van to witness the midnight harvest of these grapes. When the van reaches the top of the mountain, we’re warmly greeted by a pack of three lovable licking dogs, a couple of roosters, and the vineyard manager, Jesus, who lives on-site with his wife and children. Mari hands him a “love letter” as she calls it, from one of the ONEHOPE teammates who has recently traded Jesus her rooster for his puppy.

“So, where should we park the van and set up camp?” Mari joyfully asks and Jesus points to the top of the mountain. It’s close to an area where the terrain is still blanketed in a deep charcoal color, a remnant of the fires that have devastated Atlas Peak and nearly cost Jesus these vines. Every harvest is important, though this particular harvest seems to hold within it the power of possibility—and of hope. Mari grabs a roll of orange tape and we follow her through vines. “It’s easier to flag them in the light,” she says, waving us forward. She zigzags in and out of the rows—picking, tasting, analyzing—while spitting the seeds out along the way. She’s searching for the flavors that will create lightning in a bottle. When she finds a row she likes, she pauses, closes her eyes briefly, and nods in appreciation.

“This is it,” she says on these chosen rows, tying a long strand of orange tape around the base of the vine, a signal to the crew that these are the grapes to be picked.

“We’re looking for rich chocolate tannins,” she says while moving quickly, “like dark chocolate,” she tastes another grape, “and ripe flavors of blackberry.” In addition to flavor, she’s looking for brown seeds, which means the grapes are ripe. When the seeds are brown, the pulp will separate more easily, another sign that they’re ready to harvest.

When Mari’s done flagging, we head back to the van. The distinct ripe blackberry taste of the whole grapes still lingers on our tongues as Mari uncorks a bottle of ONEHOPE’s 2018 Atlas Peak Cabernet Sauvignon. She pours it into glasses and we sip together in silence and reflection while the sun sets over the mountains. To taste the grapes straight from the vines of Atlas Peak at their prime ripeness just moments before, and follow them with sips of this exceptional wine is to somehow, feel the future—to taste what these grapes will become. “Is that them?” Mari asks a bit later once the darkness has settled in, and we look toward the lights that are approaching in the distance. This must be the farmers.

If you’ve ever been to a wine region during this special and critical season, you’ll know that big lights can often be seen in the dark sky from the road, where crews work quickly under the moonlight to pick the grapes when they’re at the peak of ripeness. Night harvest keeps the grapes cold—it protects the flavors, the skins, and the pulps and allows the wine to be balanced yet vibrant. It also means the vineyard crews don’t have to work through the hot days and instead, can work in the coolness of the night air.

We’re about 1/4 mile from Jesus’ home, so we leave the van on the top of the hill and walk through the pitch-black night, the glow of our headlamps guiding us through the rows of vines. Before work begins, the crew drinks cups of hot coffee and enjoys a couple of slices of pizza. They’re smiling and waving, in good spirits, but Jesus tells us they’ve recently finished an excruciatingly long pick that lasted from 8 pm until noon the following day. The work is physically demanding with long nights and early mornings and this team has given up a lot to be here to harvest these grapes.

“Ready?” Jesus asks and they smile. Yes, they nod.

We head out into the fields, moving behind an ATV with a huge light and following the crew to the places where Mari has left her orange tags. The crew moves quickly, their hands a mere shadow in between the vines as they cut, gather, and sort. Jesus’ son is just four, but he’s a serious helper in his boots and vest that reads “Big Boss”. He’ll be tired soon, Jesus’ wife says, but for now, this is the moment he’s been waiting for.

“We go for a sunset ride every night through these vines,” Jesus tells us while his son picks up grape bundles that have fallen to the ground. The rest of the team, as busy as they are and working against the constraints of the inevitable rising sun, pause to let “Big Boss” throw his treasures into the bins. They clap and smile, and Jesus’ son gets back to work, picking each bundle as enthusiastically and with as much vigor as the last. This harvest is a family effort, with Jesus’ older son behind the wheel of the ATV, helping to direct the crew and light the fields, and his daughter, multi-tasking while moving between picking grapes and driving a bin-carrying tractor. And that same dog trio we met earlier, now running playfully through the night vines.

Mari walks ahead of the crew, clipping leaves that are in the way so that the team can have better visibility of the grape bundles when they reach each vine. We’re a few days shy of the full moon, the harvest moon, yet its glow is bright and abundant enough to light the vines in front of us. Bit by bit, row by row, the night inches toward morning, the bins are filled, the team finishes up, and we make our way back to the van.

At 5 am, the roosters sound and Mari heats up espresso in a stainless steel percolator set up  just outside the camper van. We pair our morning mugs with overnight oats, a famed estate favorite, lovingly made by Dan in the ONEHOPE test kitchen. It’s not until a while later while we drive back to the winery—following the bins of grapes piled onto the truck—that we see the first light of the sun.

In the winery’s crush pad later that morning, the grapes are sorted by Juan, the Cellarmaster, and Isadora, the Associate Winemaker. From the top of a ladder, Juan gently loosens the grapes with a giant pitchfork and when Isadora gives the go-ahead, the fruit topples bountifully into the sorter, through the de-stemmer, the fresh sets of hands now preparing the grapes to crush.

Though it’s been a good journey already, there’s still a way to go for these grapes. To maximize the flavors and textures of this special mountain fruit, the juice will ferment in concrete fermenters. It will then be barrel-aged, bottled, and corked. When the time is just right—maybe to commemorate a special day or to share over stories with friends at the table—these grapes will make their way to your glass.

You’ll know they’ve traveled from the rustic and mystical mountains of Atlas Peak, through the hands of a hardworking team, to be brought here to the winery where they take on their next life. At first sip, you’ll taste the essence—and the magic—of harvest and all of the people who came together to bring that wine from grape to glass.

And in that moment, you’ll become part of the story of harvest, too. 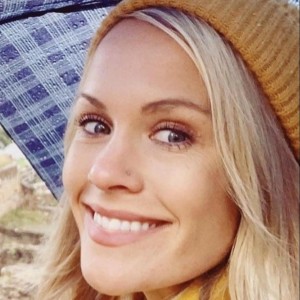 Bay is the Content Director at ONEHOPE, where she dabbles in everything from bottle copy and print material to videos and blogs. She has her MA in English and creative writing and is also a published cookbook author. She lives in Portland, Oregon with her husband and spends her spare time exploring forests, restaurants, and vineyards.